95. The habit of health: Prevent and cure life-style based diseases

Medical statistics believes that many of the rather incurable and newly (last 0.5-1 century) widespread diseases like cancer, HIV/AIDS, diabetes etc are also life-style based diseases.
Searching recently the web, I fell upon the remarkable work of a Canadian doctor named Dr Hulda Clark PhD (1928-2009), that wrote some books with almost unbelievable large number (over 500) successful cure cases , and of even advanced cases of cancer, HIV/AIDS, diabetes Alzheimer, multiple sclerosis etc.
What is equally remarkable is that this doctor invented 2 electronic devices the syncrometer and the zapper, to perform these "miracles". With the suncrometer she was able to make fast and accurate diagnostic scans of  products, foods, and the human body, for the detection of toxins, viruses, bacteria, parasites.  With the zapper to kill viruses, bacteria, and parasites in the human body, fast easy in a few minutes without antibiotics and chemicals that take days or weeks. It seems to me that her methods and reasoning is at least half-a-century a head in the medical science, and it will take much time for conventional medicine to integrate them. What is  even more remarkable is that with the above 2 electronic tools she was able to shift deeply the causal chains of the above incurable diseases from  the obvious phenomenological dysfunctions of human organs or systems to the underlying habitual life-style:  She discovered that
a) The systematic exposure in every day life of the human organism to toxins and toxic solvents or polutants from  many of the household cosmetic , cleansing , furniture and other products, devices, and foods (toxins like mold, aflatoxin, propanol, methanol, benzene, xylene, toluene, mercury, thalium, and a dozen more) makes then accumulate in various human organs.
b) This in its turn attracts a known parasite the Fasciolopsis or Fluke, to have more than one of its reproduction stage in the human body, and its various organs like intestine, liver, thyme, nervous system etc


According to the dominant solvent toxins and organ the seemingly different diseases of cancer, diabetes, HIV/AIDS, Alzheimer's, sclerosis etc appears.  In the absence of the toxins, this parasite would not create the above serious diseases but only fasciolopsiasis. If the toxins are mainly isopropyl alcohol, the parasite resides in the liver and cancer is created. If the toxins are mainly benzene, the parasite resides in the thymus, HIV is created in case the organism has already the virus of aids. .If the toxins is mainly wood alcohol (methanol), the parasite resides in the pancreas and diabetes is created. If the toxins are mainly xylene and toluene, the parasite resides and multiplies, in the nervous system e.g. the spine or brain, and the disease of Alzheimer's, or multiple sclerosis is created. Only after killing the parasite easily with her zapper device and well known old herb recipes , the malignancy, metastasis, or increasing worsening of the disease stops.  But then the work is not over, as the habitual life-style exposure to the toxins that attracted the parasite has to be radically changed. And this latter is probably the most difficult part of the cure as a great part of the individuals habits has to change.
It seems that Dr Hulda Clark had cured cases of aids, simply by killing the virous of aids, by electrocution, with her zapper.
The previous way may not be the absolutely only way to get the above serious diseases, but it seems that under normal conditions of life it is the statistically dominant way.


Modern medical science accepts that 50% of the cancers have contamination origin (e.g. side effect of contamination by viruses etc). It also accepts that cancer cells are created by the organism as an attempt to cure some "injury" that may be also from toxic exposure (like radioactivity, but also due to long term gradual exposure to little only toxic commercial products). The above explains why we may have  also child-cancers (contaminations do not  need long term exposure) or cancers after exposure to strong radioactivity (toxic "ïnjury" is a kind of contamination). 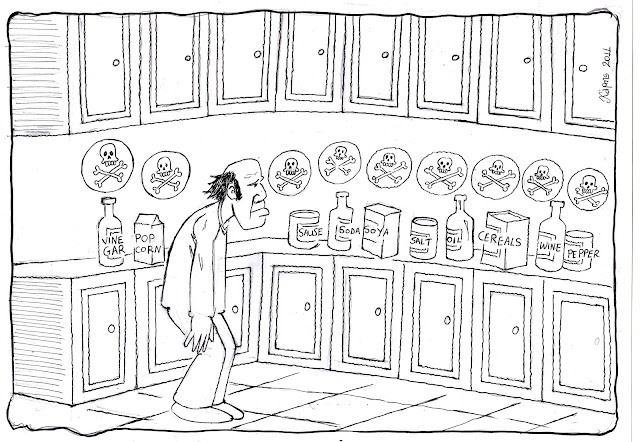