6. From dependence to independence and to interactive cooperation

At the early age till 15 years old most people are depending on the parental and educational authority and power to feed them, protect them , love them , guide them etc. So the habitual mode of dependence is created. In the modern free societies where tyranny has been eliminated, there are not slaves, where in all their life this mode was dominating and negative.
The next habitual mode is that of independence, it starts when they are teenagers, and may go on to later years. It requires not only a personal revolution, but also adopting the principle of responsibility and "inner locus of control" (see post  20) , shifting more to be aware of your thoughts and reasoning than only emotions, and interacting with greater parts of the civilization through travelling, friends, or the internet. People that tend to remain even at an adult age in the mode of dependence tend to use the word "have" in the human interactions , search always to "feel" who "has" whom, in their human environment , usually misunderstanding temporary and phenomenological appearances as if of real and permanent nature. They believe often in silly correlations among them and other peoples actions, and tend to use even in philosophical discussions expressions like "I have it bad" instead "It is for me bad". Some times tend to love objects and "have" people instead of having objects and loving people. This is very often related with pettiness towards other people, or attempts for win-lose or unequal status human relations and interactions. By focusing on that not only create their own "chains" of dependence, but also try to make other people feel and think in this way. Financial independence, behavioural independence, emotional independence are the outcome of the inner mode of independence.
Finally (according to Stephen Covey in his book "the 7 habits of highly effective people") there is the habitual mode of interdependence, and interactive cooperation, where standing on the ground of independence we seek in a regulated way, more and more cooperation and synergy with other appropriate people so as to succeed in our goal and have a meaningful and happy life. There is no really good interdepedence without both sides having achieved indepedence and respecting each other's indepedence. Knowing where our freedom stops, and where the freedom of other people starts, knowing the boundaries of our personal life (by knowing when to say no and when yes) relative to other close persons that we have relations in family, job, etc is essential for happiness and prosperity. Adoptive distancing from negative people and looking forward to be with people that have succeeded in what we are trying to achieve, is a basic resilient skill. Not knowing and protecting the boundaries of our life as one of the proverbs of Solomon's wisdom states, leads us to unhappiness and  conflicts. Of course also not knowing how to interdependent in a sincere win-win mode under the golden rule with other people may also lead to unhappiness.
In the research of the University Professor of Psychology J.M. Gottman the relations in marriages are of 3 kind Domination , Competition, Cooperation. Only the marriages in the mode of cooperation are both stable and happy. (competition leads usually to divorce, and domination may be long lasting but it is sadly unhappy like in Romeo and Juliet) Domination is in the realm of dependence, completion in the realm of  independence but without successful interdependence, while only cooperation is in the realm both of successful independence and interdependence.
There is no true maturity and success without the development of the capabilities of indepedence, and interactive cooperation, respecting the other's  side indepedence.
And this applies not only to individuals but also to enterprises, nations, and civilizations. 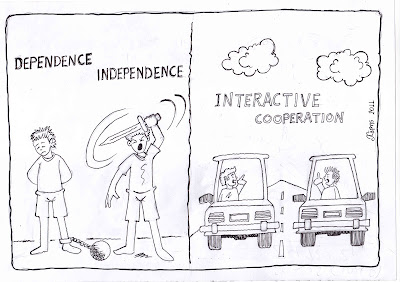 Email ThisBlogThis!Share to TwitterShare to FacebookShare to Pinterest
Labels: 6. From dependence to independence and to interactive cooperation