5. The spiritual, the intuitive, the mental, the emotional, actions and the physical

Following the 1st of 12 of the Laws of personal development (see post 84) the subjective experience of life in personal development is of a levelled or layered nature of the consciousness and existence. Following teachings from east (Culture of Vedas) or west (Neuro-linguistic programming, etc) we may list 6 layers of consciousness and existence from inner of outer
1. The spiritual
It is the source of our imperceptible long run will and persistence , the source of our preferred global life-metaphors (see post 9), the source of the ability for alternative meanings and interpretations over the same words, or images, and also it defines the scale of the part of the world, that we considered relevant somehow to our self and awareness of our life (body, family, nation, culture, planet etc).
2. The intuitive.
It is the realm where abstract symbols, images or dreams, acquire meaning and a fragrance of feeling. It gives a transcendental coherence to our complicated reasoning beyond visible logical unity. It is a bases for understanding of any language and culture.
3. The mental.
It is the standard realm of unity for a human being, through organised reasoning, and utilization of the senses. It can create the rational well set "house of order" in our life that give security, solidity, certainty, sense of freedom of choice responsibility and action.
4. The emotional.
It is the layer that most people have their attention and focus by far more than any other realm. They say that that the awareness of emotions in most people is 24 times more than the awareness any other realm. The law of emotion shows its significance.
5. The actions
It is the usual realm of our activities, behaviours, capabilities, relevant events and senses observable.
6. The physical
It is the realm of our body, as medicine and physics knows it, at present, and in future. This physical layer does not stop, at the scale of protons. neutrons, electrons, but it goes deeper than what the present state of the art of physics, has expressed clearly (see post 12, Choosing the concept of physical reality). As the present science understands after 1905 (when the existence of atoms was accepted) clearly only the 3rd physical density (see post 12), some of the above layers, like the actions, emotional etc, are also ways of speaking and experiencing very relevant of what we unconsciously control and move at the deeper unknown physical levels.

In practice it is not always good to keep in the mind all of these 6 (more could be listed in between) but only 3 at most 4, as the 1st law of divine unity of our consciousness and self (see post 84) requires that we also know our self as only one unity, monad or entity. E.g. we may just keep in mind the 1.Spiritual, 2. intuitive (psychic), 3. the emotional, 4. the physical or even only
1. The mental, 2. the emotional, 3 the physical.
Usualy the layer that we do not mention acts as the ground on which we stand and try to influence and be in the other explicit layers 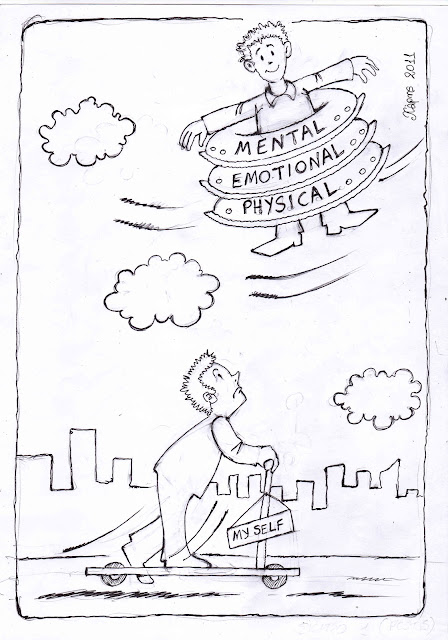 A more practical and probably more deeply scientific approach to levels of our existence, focuses to only 4 layers, corresponding to the a) Being b) Thinking c)Acting d) Having, or according to the teachings of Meher Baba, here
http://en.wikipedia.org/wiki/God_Speaks
http://ambppct.org/meherbaba/BooksByMeherBaba.php
To the a) gross physical
b) subtle physical
c) Mental (including feelings)
d) Spiritual self

Email ThisBlogThis!Share to TwitterShare to FacebookShare to Pinterest
Labels: 5. The spiritual the intuitive the mental the emotional actions and the physical